It has been a funny start to the year that’s for sure, not sure if it was the cold weather we had a few weeks ago but I seem to have had a lot of last minute shoot cancelations for some reason. Lucky for me I had arranged a shoot with Steph back in early February and a bit of cold was not going to stop her. We had had a long email discussion regarding the theme of the shoot which Steph had come up with. It was based around a wildling/hunter/animalistic girl in the woods who gets captured.

It took a bit of preparation as in getting hold of a net to catch her in (don’t you love Ebay) and also Steph did a lot of searching for bits of fur and chamois type things to use for clothing.
The day came along for the shoot and we had the theme all sorted and the right location planned. Shame it was a bit cold on the day but the sun did come out between the clouds from time to time. In fact we spent a little time on the shoot staring up at the clouds waiting for the sun to come out for particular shots, as I felt without the sun, some of the shots where looking a bit flat light wise. I love the contrast in my B&W images of the highlights and shadows and this only worked on the day with the light from the sun and an off camera flash gun, which gave me exactly the effect I was looking for.

It was a great fun shoot where we went from Steph being free and wild in the woods, being captured in the net and dragged back to a dungeon where she was chained up, finishing with her trying to seduce her guard to enable herself to escape.

We were both very pleased with the results and plan to do another shoot together in the very near future. Now let’s hope the shoots I have booked for April go ahead. 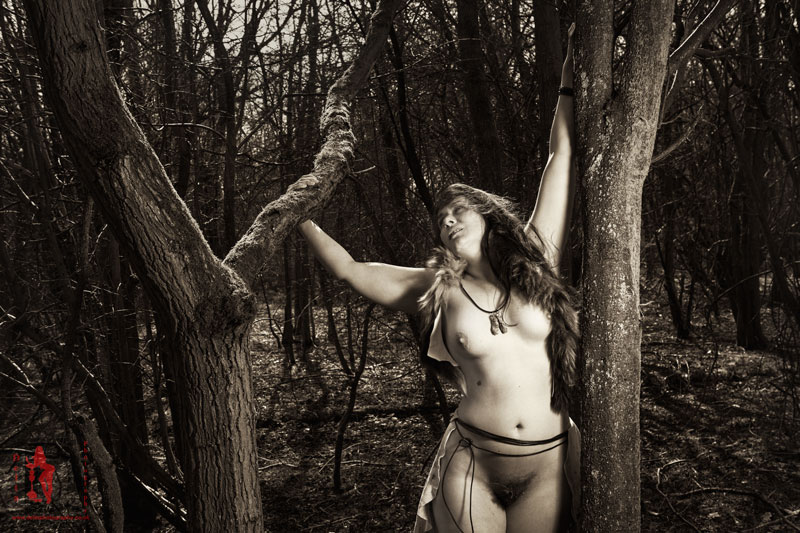