I know I stopped updating my blog back at the end of May last year, but after some feedback from various visitors to my website, I have decided to resurrect doing them starting with my first shoot of 2015 with Gloria_S.

Over the winter I shut down my home studio as I found I was not using it and it was taking up valuable space in the house. So after a few weeks of decorating the studio is now a spare bedroom for visitors. I have kept all my studio lights and may use the bedroom for boudoir type shoots.

As any past regular reader of my blogs would know I much prefer to shoot outside on location and I am planning to do as many locations shoots this year as is feasible. With that in mind the Camera came out of its winter hibernation for a shoot at the end of February for a much discussed shoot with the lovely Gloria_S. I last shot with Gloria back in 2011 and it was one of my most productive shoots, as in portfolio material. So since then I have been trying to arrange another shoot, with her, but due to her moving out of the local area it has just not happened till now.
The whole theme for this shoot was based around witches. A private collector I sometimes do work for asked for me to do some witch themed shoots and specifically wanted Gloria_S to play the part of the witch as he loved the previous images I did her of back in 2011.

I had a lot of the props from previous shoots, as in the hat & broomstick, but needed to get hold of an old fashion Pilgrim woman’s outfit, where eBay as usual came to the rescue.
It was a extremely cold day and I have to thank Gloria_S for making the best of the temperature as well as the boggy location I chose for the shoot (I was not expecting the ground to be so wet)
The shoot was a challenge in a two ways as in firstly the light, which was changing constantly and also that my collector wanted a lot of the images to show movement, which I accomplished by using slow shutter speeds, but at the same time I did not want to use a tripod, as I felt it would have restricted the flow of the shoot, so I had to have a steady pair of hands.

We did various sets for this shoot as in Gloria_S in the Pilgrim Woman’s outfit, some with the broom and witches hat, some without, and then moved onto lingerie, followed by some with Gloria_S in a full net skirt which my wife supplied. The skirts shots we concentrated on trying to capture movement and Gloria_S was constantly on the move (think this was because she was freezing by then). But we got some fantastic shots, which my collector absolutely loves.

We finished the shoot with Gloria_S nude, apart from a pair thing length boots.

All in all, the shoot was very successful and my collector is delighted with the results and I have managed to create a few more images which I believe are worthy of my portfolio and I have include my favourite of these here for you all to view. 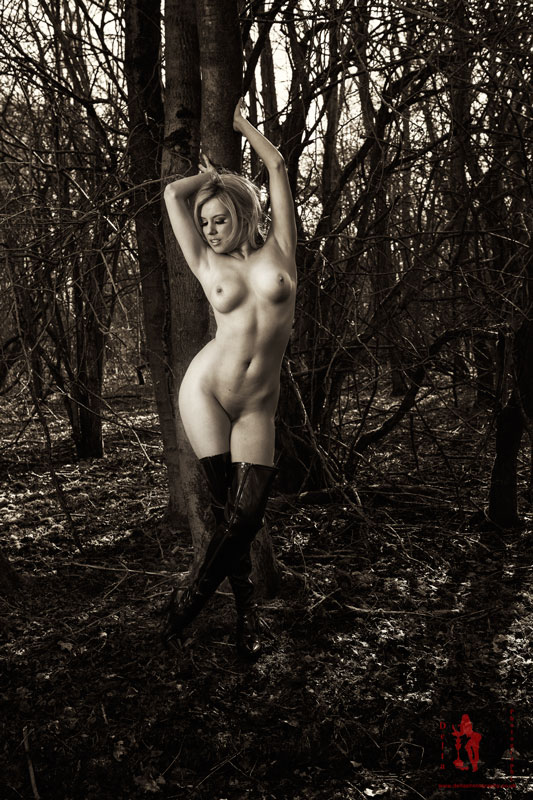