I did my first shoot of 2014 with JessicaHilton last month and have just finished editing the images. Due to the time of year we thought it best to stick to the studio for this particular shoot although I am itching to work outdoors on location, which I find much more challenging and fun. I have found a few brave models though and the next 3 shoots booked in the diary are all planned to be out on location.

Back to the shoot with JessicaHilton, this shoot was more about helping her build her portfolio, so we had decided to concentrate on some Glamour Lingerie shots and topless but to try and give the images a bit of an edge, so I incorporated some really thick rope in some of the scenes.

My set-up was basically to use a main light with a large octagonal soft box to camera right and a fill light to camera left with a small softbox.

Halfway through the shoot I incorporated some piping and chain hanging from the studio ceiling and added a smoke machine with a light behind JessicaHilton, covered with a red Gel to give the smoke some colour and highlight it more in the images. Must be 2 or 3 years since I used a smoke machine in the studio and I had forgotten how much fun they are. Shame I can’t use one out on location as that would be amazing in some of the old buildings I use.

I have included my favourite image of JessicaHilton from the day above, and hopefully I will get to work with her again in the near future. 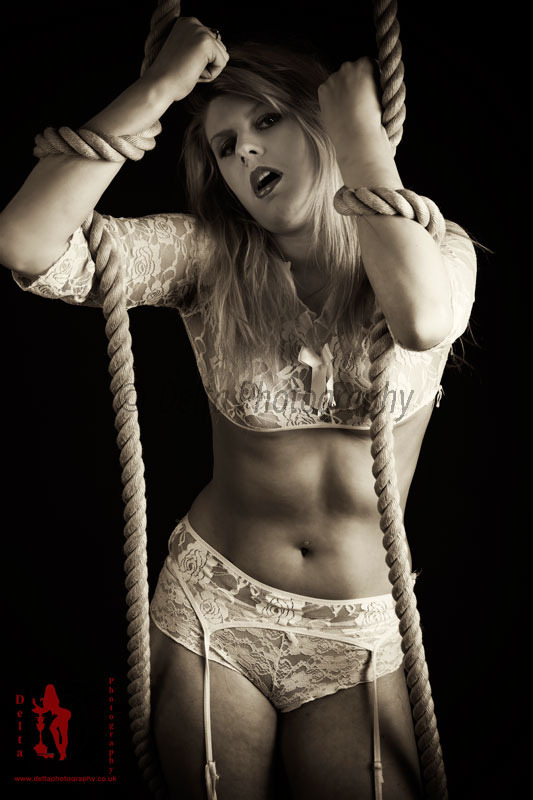