I can’t believe it has been over 3 months since I shot with Sarah, and I have yet to update my blog regarding this shoot. As a lot of you will be aware I have suffered with some health issues which have stopped me shooting since back in early June. Thankfully I can report I have now had the surgery on my neck for the pro lapsed disc and am well on the way to recovery and hope to be back shooting in October.

Anyway back to the shoot with Sarah, which was my 2nd with her, the last being back in June 2012. We went to the same location again without any real pre conceived plans for the shoot.
Sarah brought along her Storm Trooper outfit (yes Sarah is Star Wars mad it seems and has a large collection of memorabilia from the films) and of course we had to start with her in that which I thought would look great against the dereliction of the building we were shooting in. Again I used my normal lighting setup which you will all know if you read my blog on a regular basis.

Then we progressed onto a set with Sarah wearing a white jumper and big suede boots, before finishing the shoot with a fetish theme with Sarah having in a boob tie, my favourite image from this set is included above.

I would have liked to have shot much more, but the pain from the pro lapsed disc was really kicking in by the end of the shoot and in fact other than one more shoot I did 2 days later, which I will blog about very soon, I have yet to pick up a camera since and am seriously missing it. But fingers crossed it will not be to long before I am out shooting again. 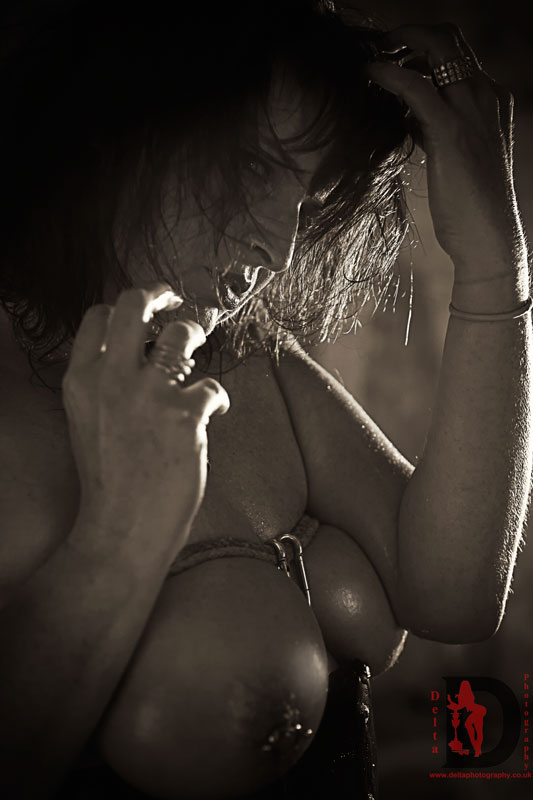