I can’t believe it has been just under 3 months ago that I shot with Clover and only now am I getting my blog up to date. I have had to put all photography work on hold and I will just be getting my blog and editing up-to-date for the shoots completed until such time as the neck issues detailed below are resolved.

I have been having some major issues these past 4 months with what I thought was a simply a trapped nerve in my shoulder, which has made it very difficult for me to shoot and even work on the computer and at times, impossible due to the pain and lack of feeling in my right arm. After lots of Physio and a MRI scan it has been confirmed that I have a Prolapsed disc in my neck which may require surgery to correct. I am currently waiting to see a Neurosurgeon in Oxford who hopefully will be able to fix this problem for me.

Due to this I will not be doing any photoshoots until this issue has been resolved, which hopefully will be in a few months. It could have happened over the winter, as I seem to be missing all this amazing weather for outdoor shoots. I am very slowly trying to get my Blog and editing up to date for shoots completed before the problem got to severe to do anymore..
Anyway back to the shoot with

Clover which I had been planning for ages with Clover. The whole theme of the shoot was based on some old Japanese drawings I had come across where the rope work while being very intricate at the same time as looking very rough with old ropes and given the impression it had been carried out with urgency.

For this shoot I needed a Rigger as my rope work is not anywhere good enough for the look I wanted to create so we asked Wkyd-Dave who is Clovers Partner to come and do the rope work.
The shoot was done out on location in the woods, as I felt these surroundings would lend themselves perfectly to the look I was hoping to archive and we were also lucky in having perfect weather with the sun filtering through the trees which would help in creating the lighting effect I wanted.

I used the sun as backlighting and then also used one strobe off camera to provide fill light, which was mostly positioned to camera left.

We had a plan for four different scenarios and once the rope work was done we just played with the angles and lighting to achieve the final images we wanted. I have included my favourite image from the day, but many others are available to view on my

Deviantart Account I have to thank Wkyd-Dave and Clover for their massive contributions to what was a very successful shoot, which I hope to repeat in the near future as I have a few other scenarios in mind to try now. 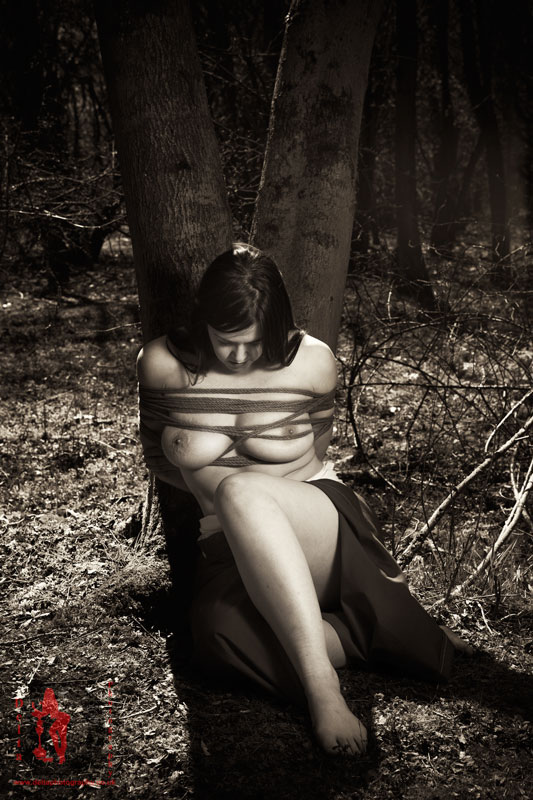