Third shoot with AkariDesire though this time we decided to shoot in the studio for a change as on both previous occasions we had worked together out on location.

I admit I didn’t really have any plans for this shoot, other than it would be art nude mostly but with a twist as in wearing a mask and other odd item of clothing and just seeing where the theme would take us.

We started off with AkariDesire wearing a black fishnet dress and then quickly moved onto to her wearing just a green corset which I think looked great with the suspenders just hanging and not wearing the stockings with it. I had a Green mask with feathers which matched the green corset perfectly so we just played with the theme for a while to see what we could capture and the image above is my favourite from the set. Not that you can tell it’s a green mask and corset as typical of me I turned the image Black and White. Saying that though I also did some post production edits of some of these images in colour but very de saturated just leaving a touch of the green in the shots, which I think looks very effective

We then did some Art Nude shots incorporating a white mask and then trying some images without the mask but trying some very strange poses as an experiment really to see what would work and what wouldn’t. This is one of the reason I love working with AkariDesire she is more than happy to try something completely different and accepts sometimes it will create a great images and sometimes it just won’t work at all.

Lighting set-up for the whole shoot was my typical studio set-up of one light with octagonal soft box with grid.

Looking forward to some warmer weather now and arranging another location shoot with AkariDesire. 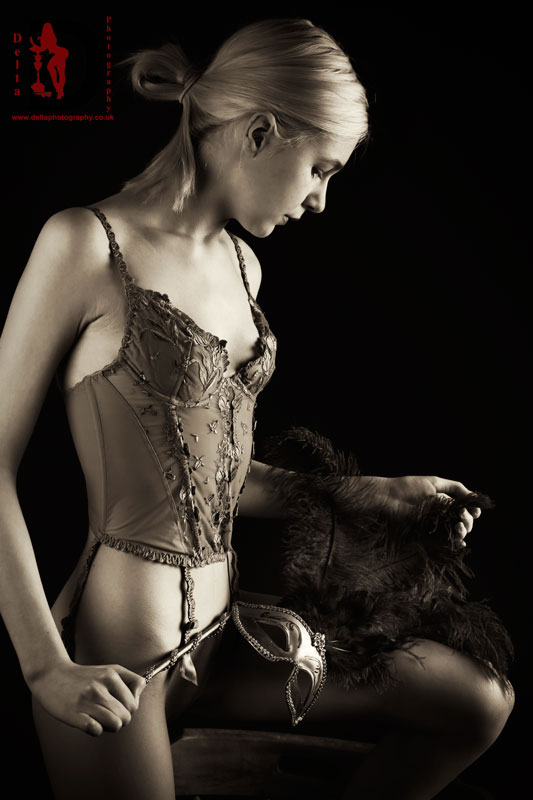