What happened to 2012 it seems to have flown past so quickly and here we are in 2013 and I am blogging about the first shoot of a new year. I also started off the New Year with a month long ban from Facebook because someone keeps reporting the images I post on my Facebook group. I wouldn’t mind if these images showed anything but all they show is mild bondage and cleavage and I see far worse being posted on Facebook daily. If you don’t approve of my work, which is fine with me, just unlike my Facebook group and then you won’t see it instead of being narrow minded and reporting it all the time. This is my 3rd ban in as many months and I am getting tired of it, rant over!

Now back to my shoot with MericGold who I was lucky enough to work with a few weeks ago. We didn’t have too many plans prepared for the shoot other than she wanted some fetish style images. We decided the studio was a good idea as the weather was freezing, but without the advantage of snow on the ground. I wonder why it is I never have shoots planned when it snows as I would love to do a snow shoot at some point in the future. Anyway I digress again 2013 must be the year I ramble on a lot.

I use a very simple set-up in the studio and tend to shoot against a black paper background which I prefer to material as I don’t have to remove creases afterwards in Photoshop. Generally I use one light with a large Octagonal Softbox which has a grid on it as I like to be able to direct my light and don’t want it to bleed onto the background. Sometimes depending on the shot I have a fill in light on the opposite side for fill and this was the set-up I used for all the images of MericGold.

We started off with some simple shots with MericGold in just a man’s white shirt and wearing stockings before adding handcuffs and then quickly progressed onto another set with MericGold wearing just a body stocking which I always think look great. Then included rope in the shots and making sure all the way through the shoot to include lot’s of bum shots as I am thinking of doing another book this year of just bum shots so intend to ensure on all shoots this year I include a Varity of them. In fact I have included my favourite shot of the shoot above which is in fact a bum shot.

Throughout the shoot I used the main light and just slightly adjusted it’s position to get the light exactly how I wanted it and either had the fill light on or off depending on the final mood I wanted for each set.

I am hoping to shoot with MericGold again this year once the weather has warmed up as the idea’s we have need to be done out on location. 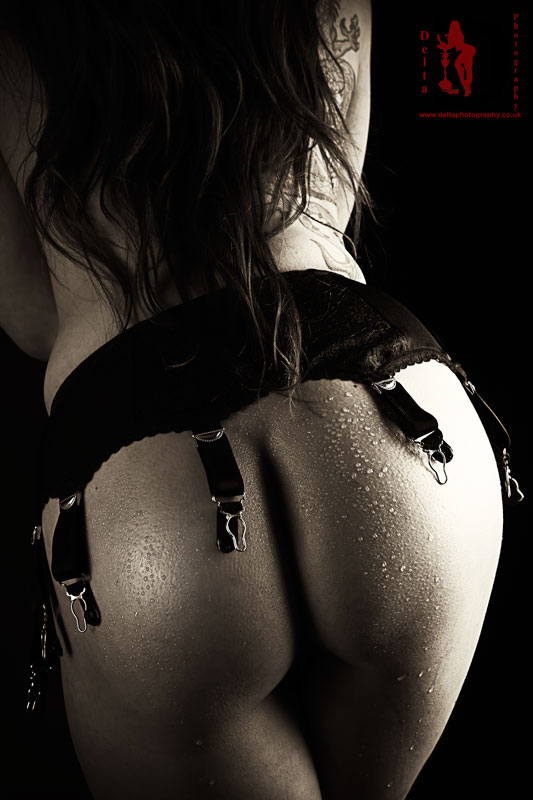