I had my first shoot with Sapphire Blue a few weeks ago and it won’t be my last that’s for sure. Sapphire was a complete star on the day. We both wanted to do a location shoot but in early December it is never the warmest weather, and in fact was down to only a few degrees’ centigrade. I gave Sapphire the opportunity to switch the shoot to my studio but she was determined to shoot out on location, which I was very happy about to be honest as I dislike this time of year because most of the models want to be wrapped up warm in the studio while I still want to be out on location, as I believe that is where I create my best work.

Sapphire turned up for the shoot very well prepared with a flask of Hot Chocolate and a blanket to wrap herself in between shots. The plan was to do some fetish images in this old building and started off with some of her kneeling on the very cold concrete floor with her hands tied behind her. I had Sapphire keep her knickers on for this set, but just pulled down as I thought it would add to the story, but in retrospect I am not convinced that this was a good idea, so will put this set on the list to reshoot at another time minus the knickers.

We then moved onto a set with Sapphire standing but with hands tied above her head, the results of which I was very pleased with. I should say at this point I was using my normal location setup of one strobe off camera with an umbrella with the background being underexposed by a few stops.

Then we moved to Sapphire kneeling and her hands tied in front of her, this turned out to be my favourite image of the shoot and have included it above. I just love how the light catches her bum cheeks & back. I would add with all my photography I move around the model a lot and try images from all different angles as well as some shots from low down as well as high up, and this particular shot is a result of that as I was shooting from Sapphire’s left, but wanted to see what the difference would be from the right and shooting into the light and in my opinion it produced the best shot of the day. This was a lesson I learnt very early on with my photography, to not be afraid to move around and explore the angles. I generally come home as dirty as the models due to laying down on filthy floors trying these different angles and views.

By this time in the shoot Sapphire was freezing and you can’t tell from the images, but she was shivering, so we took a break so she could warm up and have a hot drink, before moving onto a set outside the building where I thought it might be a bit warmer as these old brick buildings always seem damp and colder than out in the fresh air. This time we used a tree to tie Sapphire to and put on a Tongue Clamp.

I was very concerned my how cold Sapphire was getting but like the absolute trooper she is she wanted to do one more set before we left, which was her sitting in the building handcuffed and looking desolate. Once this set was complete we finished up and I got Sapphire back to my house for a warm shower and a hot drink before she drove home.

Sapphire was a joy to work with and gives 150% to the shoot and I can’t wait to work with her again in the New Year, though we may wait for spring when it is a bit warmer as we both want to work on location again. 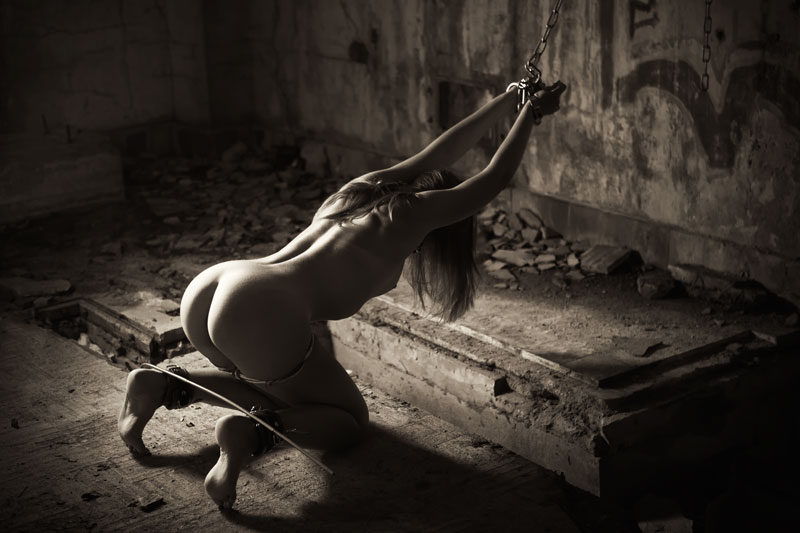