TansyBlue and I had been discussing doing a shoot together for a little while and one of her ideas was to involve a male model in the shoot, with the male model being the dominant in various fetish scenes we discussed.
TansyBlue did ask me if I knew any male models who would fit the part, but my list of male models is very small and I thought it was important that TansyBlue picked the model as she would need to be comfortable working with them as I felt this would be critical for the success of the shoot.
TansyBlue found Cage through one of the modelling sites, who had a great look and fitted the part/role we had in mind for him. Now all we had to do was book a date which we quickly did and planned for the shoot to be out on location as an old building I knew would really help with the story. The date we booked the shoot for was maybe not a good one in hindsight.
TansyBlue and Cage planned to travel up to me after TansyBlue finished college that morning, which once they got here turned out to be after 2 o’clock in the afternoon and as we were going out on location I was worried about the light as it was a very overcast day and the clocks had gone forward that weekend so I feared we didn’t have many daylight hours left to shoot in.
I think by the time we got to the location it was 3 o’clock and the building I wanted to use was very dark inside, so we decided to start doing some images on the outside of the building having TansyBlue tied to tree’s etc. With Cage pulling on ropes, holding TansyBlue by the neck and generally not being very nice. I was very impressed with the latex outfits Cage brought with him which it turns out he also made for himself. I should say I used my normal lighting setup of one strobe off camera with an umbrella for the whole of the shoot. When shooting with more than one model together though you have to be very careful on the placement of the light to ensure one of the models is not throwing ugly shadows over the other etc. This can also be avoided by watching the light and getting the models to move an arm, head or other body part as required.
After the first set we moved into another building and had TansyBlue lay down while giving Cage two pinwheels to use on her. By now the light was really fading quickly so we went back to the other building to try an idea we had talked about of TansyBlue with Ballgag and on a chain with Cage dressed holding the chain and a whip. The first few images worked ok but suddenly I could not even see TansyBlue and Cage through the viewfinder of the camera as we had no ambient light at all so my composition and focusing was becoming a bit hit and miss so we had to call a halt to the shoot. The image shown above was the last image taken on the day and was a lucky shot really as to be honest I could not see anything when I took it and just guessed roughly on the correct position of the subjects.
While I love the challenge of working outside at night, you do have to have some sort of light such as Moonlight, streetlights etc. The problem we had was we were in the middle of nowhere with no sources of light at all.
I do hope I get to work with both TansyBlue & Cage together again when we have more time as they work together really well and are both bring so much creativity to the shoot. 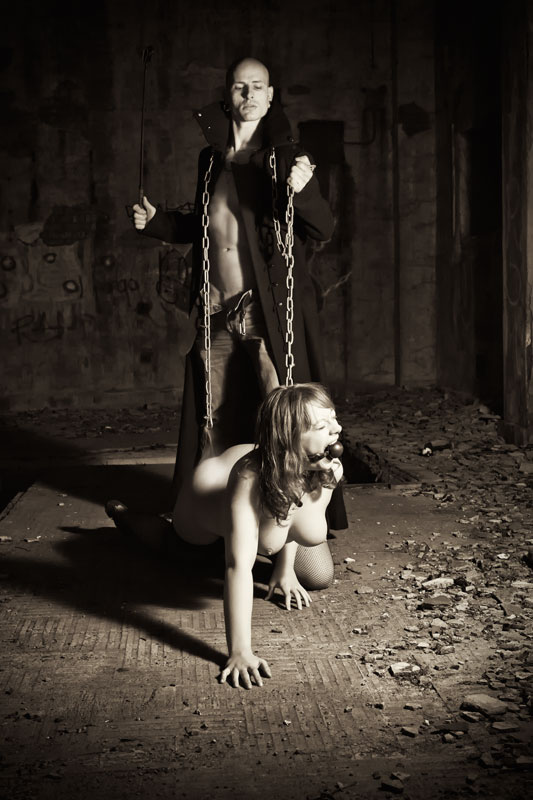