I had my third shoot of the year with Clover last weekend and can’t believe how little we have shot together this year. Looking back at my previous shoots I worked out we had shot on average 9 times a year since our first shoot together back in March 2009.
We chatted about this on our shoot and it’s all down to both our lives just getting busier and not being able to schedule our diary’s to match at a months’ notice. So we have a plan! In the next few months we will book up at least 8 dates in the 2013 diary to ensure we get back to our normal amount of shoots and also try and schedule in a few of those shoot being full weekends. Anyway I am digressing and should get back to the topic of the actual shoot.
I had no real plans for this shoot other than a School Mistress & Schoolgirl theme with my wife Kazperella playing the School Mistress as she has the sternest School Mistress expressions I have even seen, in fact they are damn right scary? My wife then came up with a puppet idea while we were watching a music video on the morning of the shoot featuring puppets, so we had all our ideas sorted.
Due to the weather we used the studio for the shoot and I went with a very simple light setup of just the main light with large softbox and grid, occasionally incorporating a hair light on to gain some separation from the background.
It was so much fun shooting my Kazperella and Clover together and we had all forgotten how much fun we had doing these shoots, so more of them will be planned in next year’s diary for sure. Also they are very easy for me to shoot as when they work together the ideas just seem to evolve on their own with some great and very different results.
Once we had completed the school theme we moved onto the puppet set, which took a while to setup as in having the ropes connect to the ceiling and still allowing movement so my wife could play the puppeteer standing on a chair beside clover and pull on the ropes. This started off with Clover looking doll like with ribbons in her hair, but then developed into a Kinky Puppet theme with nipple clamps and dental gag. One of the shots from this set can be seen above.
We then finished of the shoot with an idea of Clovers, where Kazperella dribbled red wax onto her tongue which was clamped between two bits of bamboo this image can be seen on my Facebook group. You will need to be signed into Facebook to view it and while you are there why not leave me a like on my Delta Photography Facebook Page 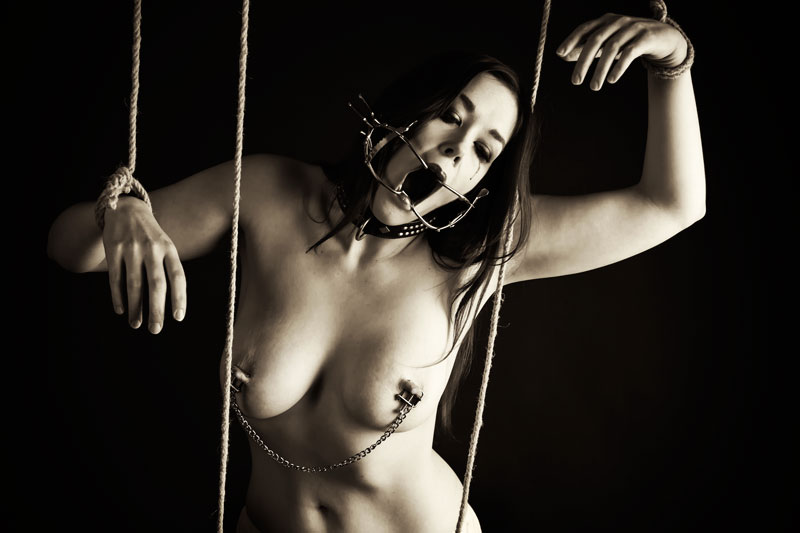