Surprisingly it has been 18 months since I last did a shoot with Sami-C, somehow I don’t think it will be as long before the next shoot with her as on both occasions now we have a very enjoyable shoot together and created some great results.
We had been discussing this shoot for a long time and were hoping that we would able to schedule the shoot earlier in the year as we both wanted to shoot at the same location we had used before, but for whatever reason we could not find a date where our diaries matched until last weekend. So even though the temperature was dropping we still wanted to go ahead with our location plans.

Even though we both wanted to use the same location, I didn’t want to use the same building as before and wanted to use a building where there is an old brick archway inside. I have shot a few times in this room before and had always wanted to capture an art nude within the archway, but for whatever reason I have not got the shot before I really had in my mind. So I decided to use this particular building with my main aim being to capture that particular image that had been in my head for a long time now.

It was a cold damp day but like the gentleman I am, I packed a fluffy pink dressing gown in my bag for Sami-C to wear betweens sessions. I have to say though as the day’s shoot progressed the sun was constantly trying to come out but failing miserably so I have to commend Sami-C for coping with the cold and not letting it show in any of the images.
We drove to the location and walked to the building I planned to use for the shoot. On arriving and looking around the location in general I was surprised by the state of some of building and the decline in them in the short time since my last visit to the location. I am starting to think that the location may become practically unusable next year just on safety reasons. Most of the buildings are wooden and every visit see’s more and more roofs collapsing etc.

The first thing we had to do was clear the brambles growing on top of the arch and hanging down into the actual archway I wanted Sami-C to be in. I have to thank Sami-C’s husband who was a trooper and climbed up the arch and cleared it all.
Once we had generally cleared the area I set the lighting up for the shot which in my mind had always been backlit. So I set up a strobe behind the arch at about 45 degrees to the opening with an umbrella. For this type of set-up it is essential to have Wireless triggers that will work even though you do not have line of site from the camera to the actual strobe, I use Pocket Wizards and would highly recommend them.
After some minor position changes with the strobe and camera settings I got Sami-C to pose in the archway and just loved how the light just instantly gave me the look I had envisaged within my mind. Now we just had to work on the pose which came very quickly and this final image can be seen above.

We continued with this set-up for a while, trying different poses before getting Sami-C to put on a leather jacket, gloves and boots and trying this in the archway and then changing the jacket for a scarf. I always think nude shots can look great if the model is wearing something, even if it is just one item of clothing, my influence for this comes from Dahmane’s book ‘Dressed Nudes’ which is well worth trying to find a copy of.
By then I was thinking we had exhausted the use of the actual arch and so took some more images in the same building, but using different walls as the backdrop, trying to show the rough textures of the walls against the smooth skin of Sami-C.
We then moved to the building next door, which was in a real bad state as in collapsed roof and walls that looked like they had seen better days. So we were very careful in this building to not disturb anything and finished the shoot with some more art nude shots against this general dereliction and also a few mild fetish one’s with Sami-C manacled to the walls etc. Again for all these images I used just the one Strobe with an umbrella generally to Model left.

This was a very successful shoot from my perspective and I will be working with Sami-C again in the near future. 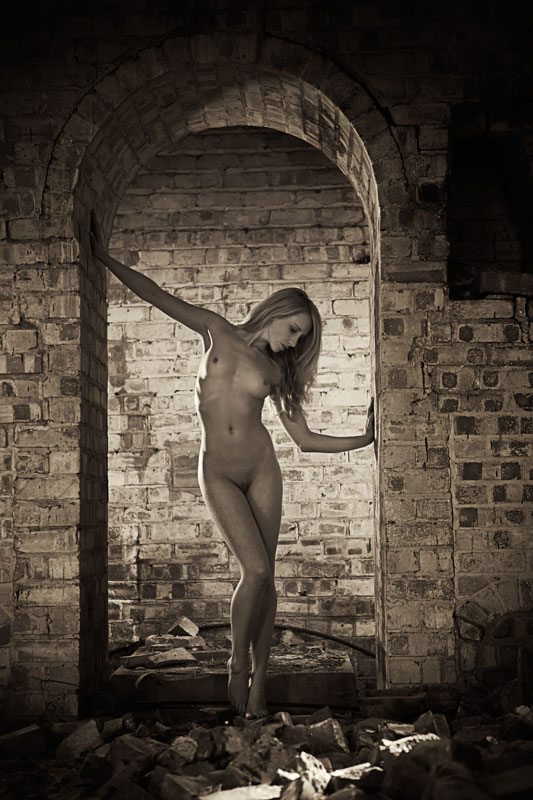