I came across Maddy on Fetlife and saw she was just treading the early steps of modelling having done a shoot with another photographer very recently, as she was in Northamptonshire I dropped her a mail and starting a discussion regarding doing a shoot together.
As it turned out she was more local than I initially thought as she lived in the same town as me and was only 5 minutes walk from my house and studio. As we were so close she popped around for a cuppa so we could talk about the shoot and different ideas about a week before the actual shoot.
We both wanted to do the shoot out on location, but on the day of the shoot it was pouring with rain, so we reverted to plan B which was to use the studio.
I have to say Maddy was a delight to work with and for someone with so little modelling experience she was a natural and I am delighted with the results.
I used one main light for all the images in the studio with a large softbox and added a hair light to some of the images. But mainly I concentrated on just the one light, which is my preference these days as it is the same as I use on location most of the time and gives me the effect I want, with just the correct placement of the light to the model.
We started with something I had done before as in Maddy wearing a body stocking which we ripped apart. This particular body stocking had a spider web pattern on it, which created some great lines and patterns, contrasting with the holes we added. I have included my favourite shot from this set below, which while editing I dropped in a different background using Photoshop, something I haven’t done for quite a while.
We then proceeded to do further fetish type images and finished with some art nude shots, some of these can be seen in the Galleries sections of my website.
This was a very productive shoot for me and was hoping to shoot lot’s more with Maddy with her being so close, but seems she is off to University in York any day now, so I will have to just make do with shooting with her again when she comes home for holidays. 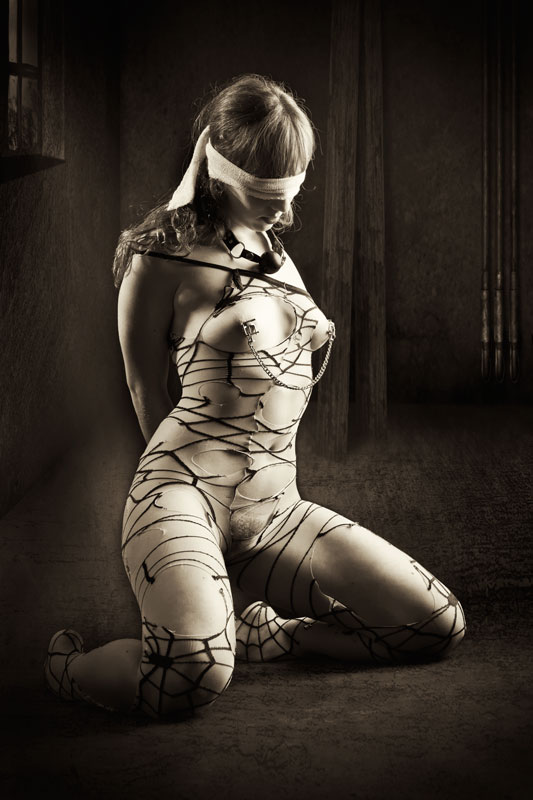