I can’t believe when I look back, that the last time I did a photoshoot with Laura it was back in late January. Where does the time go? I remember talking to Laura soon after that first shoot together, about arranging another one. Let’s hope it does not take me as long to get her back down for another shoot.

The plan for this shoot was to try and get back to doing some fetish imagery as I seem to have been concentrating more on the Artistic Nude against the backdrop of dereliction this summer.
I still wanted to do this fetish shoot on location as I am sure it will not be long before the weather just gets too cold for location shoots, and I have to return to the studio. Although I will avoid it as long as possible as I just love mixing ambient light with strobe light.

I didn’t have any firm plans for this shoot other than fetish being the theme and just wanted to play it by ear and see what developed.
This turned out to be a very productive shoot and I am very pleased with the results. I used only one strobe for the whole shoot as fill in and set the camera to underexpose for the ambient light.
Mine and Laura’s favourite image from the shoot, is interesting as I was shooting Laura against an old brick wall on the outside of the building, where the sun was creating great patterns of light due to having to come through tree’s and the undergrowth.

I was getting some great images shooting from Laura’s left, but decided to see what it would look like shooting from her right through some shrubbery. The light was even better from this angle and reminded me of one of the most important bits of advice I ever read when trawling through all those books on photography, Move!!! Yes don’t just stand in front of your subject, move around, get low, get high, and basically work the angles. Sometimes the results will not be good, but sometimes they exceed your expectations.
I have included a Critique that someone left on this image in Deviantart and I was so impressed with his description I just had to let you all read. I wish I was able to use the English language this well in describing photographs.

“The first word I used to describe this image was "haunting". And indeed, it has a sort of dark fairy tale forest sort of feel to it. But this comes from the juxtaposition of elements rather than any one unearthly effect.

The model leans back against a brick wall, head cocked at a carefree angle. Her arms raise in a leisurely yawn. She could be stepping through the French windows of a stately bedroom to greet the dawn, for all her pose tells us. What you see of her face betrays nothing but serenity.

The light, broken by trees, shatters and refracts. The shards mottle the brick wall and what vegetation has taken hold there. She is leaning back against the cold clay, relishing the shower of sunlight on her nude form.

But for all the cheery disposition of the model, everything else in this scene has a dark or threatening aspect. Bare cobwebbed branches jut out in the foreground, reminding me of the Hudson River School of painters. The girl is bound, a knotted crotchrope pulled tight. Clamps connect her nipples by a chain that hangs catenary. She is ballgagged and blindfolded.

When you look closer, you begin to see that the model is the one tying the blindfold on. Her hands could easily undo everything on her, but that little detail suddenly explains everything. Once you see this as a self-bondage scene, the placid expression becomes more of a satisfied smile. The model is in her element amid cold bricks and rough rope, thorny branches and steel clamps.

This is an image that keeps me looking for more. I cannot tell where technical flaws end and serendipity begins! I have to wonder if Delta feels like a careful plan bore wonderful fruit or if lightning struck. The shadows and branches and ropes all play together pragmatically against the model's body, and yet the subject of the photo remains clear.

It still haunts me, but in so many wonderful ways!"

Please feel free to leave feedback, comments etc. It is much appreciated. 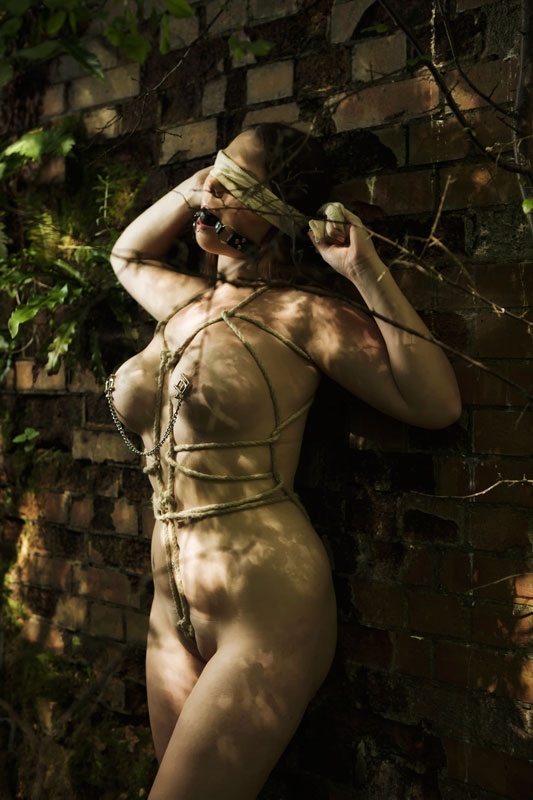